I WATCH I WORRY

THE SUITS AND THE ECHOES

THERES PANIC IN THE GHETTO

THE PIONEERS AND BABBLING MERCHANTS OF DRIVEL

THE ROOMS  AND THE RECKONING

THIS RIVER HOLDS MANY

WHERE THE RIVER GOES

I WATCH I DON’T WORRY

Surrounded by storm sea surges, snow sprinklings and a panic winter press sensationalism. I’ve sat in my little music cave Claudsville Studios. With some instrumental ‘rumpy pumpy’ the first of my new born kids being dropped off at the pool is Mantaray. This embryonic adventure into haunting piano and loops, Fender guitar expelling mellow cries into the night air for alternative progression on this track. With recording equipment situated on my old Reiki treatment couch (for the vibes) I sat in the glow of a salt lamp with a Crassula Ovata (money plant) for company, while the love of my life slept in the next room. As she stirred in slumber, she believed she was sweet dreaming, listening to my early morning vocal take yawns, harmonies and lyric editing as I progressed. With an oceanic theme around rescue. The song explores the burden of love. A song that arouses from the deep blue ocean then grabs souls with its undertow. This track is number 1 of a new solo album in progress. I’ll add each song as they unfold. Under the Stephen Fry inspired working title of ‘Babbling Merchant of Drivel’ progress is inspired in a Rue Morgue kind of way.

I’m currently in the middle of recording Strange Currencies album ‘Making Monsters’ So it a very musically indulgent time. Pretty darn cool actually.  I’ve spent the last 2 evening sessions suffering low mood and  red light fever recording the acoustic guitar parts for ‘Stay Down Kid.’ My one take wonders rule left me for dust! With cats jumping all over the studio during takes, and sore fingers. I’m hoping next weeks session will tell a different story. Luckily the swearing flowed like warm pee then the boiling hormonal blood ran free and with a little assistance from some garnet gemstone in my shorts pocket. I kind of nailed it last night. We had recorded a live version to work to. PP Johnson liked his live vocals. So as I’ve just D.I.’d the acoustic. I’ve had to overdub it and mic my trusty ‘Taylor’ up.  A song that has been played loads live with my eyes closed… Well.. maybe I should have swapped mugs of tea and vitamin water for Rum. But I think its kind of there ready for mix and master. As this album evolves.. getting the right balance of ballad, funky, poptarty, dirty, distorted and hints of country. Even though I know it will work out great in the end. I learn Logic Pro X as I go. The January blues will depart and be looked upon kindly as a productive time in the darkness.

So here it is by Claudine West

Like Loading...
Composition
/kɒmpəˈzɪʃ(ə)n/
Bear with….To construct and deconstruct an idea is one of the most rewarding things a songwriter and musician does. The aftermath is a performance of said idea. The recording and capture.
There are many ‘jukebox’ bands and artists that simply cover others good work, some do it well. Some are cringeworthy.  I’m sure there are lots of talented musicians that are visual iTunes mini players.  Its super duper some make a fair living off performing week in week out. Nice! Hobbies are fun aren’t they? Familiarity favours applause. When attending a recent event. Comments were made that did not favour original bands. A moan at the lack of ‘covers.’ (3 words for you Sunshine. 1. Hung 2. Drawn. 3. Quartered)  I love watching bands. Being in this one (Subway Circus) we do a reworked version of Mad World. We have our guilty indulgences too.
Subway Circus YouTube maybe a rocked up ‘Jolene’ will emerge one day.  We did tinker with ‘Rain.’
Having seen The Cult live recently (29th March, Rock City, Nottingham). I think I’ll leave it at that.
Copying is flattery.
They were supported by the band Broken Hands. Lovely bunch of lads. We purchased their new album ‘Turbulance.’ Its on rotation in the car. 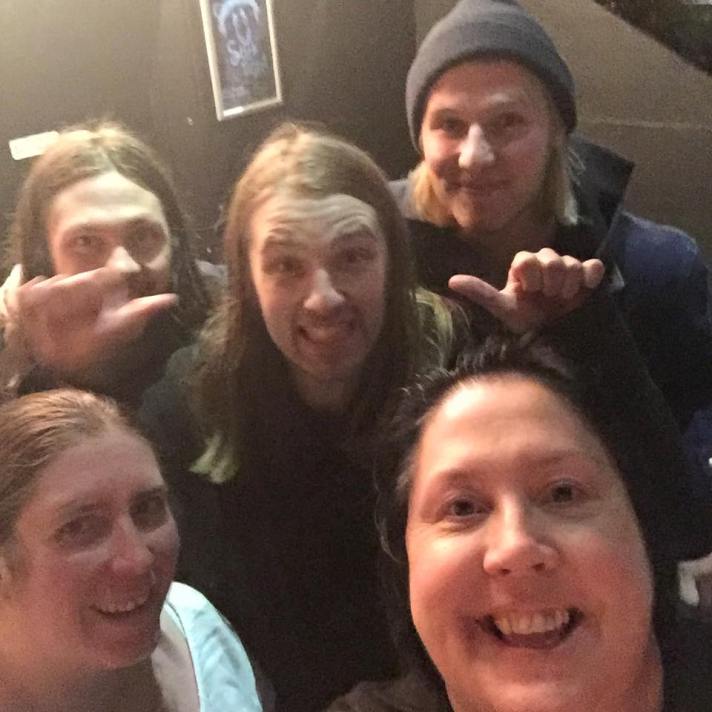 Playing to an empty room with disinterested folk is job satisfaction in a basket ;-0 Seen as a rehearsal performance out of the rehearsal room- Minus the vulgarity, Rainbow Bungle, George and Zippy impressions (making me cough up my ovaries) banter and frolics. Have you seen Bungles Twanger?
So what is the secret of writing songs?  Meeting your maker, inspiration, booze,drugs, booze, meditation, luck, structure, key changes, talent, creativity, satanic rituals, sacrifice, alien autopsies, tips from higher powers?
What make a hit? Catchiness, riffs, hooks, hocus pocus,  promotion, investment, formula, attractiveness, image.
Sometimes the least favourite song one makes becomes the most popular. They you are stuck with performing it forever more. When even the thought of ever listening to it again in this lifetime makes the black plague seem an easy way out.
Of course you can also get signed (apparently is possible if you tick the criteria they desire yes!) Or use puppets! Sell out, change your sounds, get writers in, sing out of key, try to act hard, hang out with the big bad boys and be opinionated, get moulded, produced, marketed then probably dropped. Never play in your hometown where you were once humble and playing to nobody. But you know what? Puppets have good times!
You can sit or stand there with a guitar, a piano, a thought, a lyric, a loop, a rhythm. As a band we jam. It begins with simply that. Paul on guitar will introduce a riff, or ‘Speed’ our Bassist with come up with a bassline. Drums follow by myself, or begin. PP sings ideas. We have written a song from a vocal.  I like to document the process. I’ll be able to take a wonderful trip down memory lane after. I’m unable to show the jam of ‘Razorface’ we made last night..Sorry. We will of course showcase when done.
Songs are sounds, notes, chords, tones, melodies, rhythms. Songs are beauty. Songs are orgasm, Zen, Eden, The Celestine Prophecy, exorcism. They birth Demons. This is how they roll.
How do we do it? We have begun writing our 2nd album…It may be Unusual..It may be Haunting… We are soon to be going into studio for the 2nd session to finish our debut album.  Yes 2 sessions  = album.  Later in 2016 we will record our 2nd EP. ‘The Law.’
We have been playing our instruments for a number of years and practice weekly. Invested. If you invest time and effort you tend to get competent. If you are lucky enough to be gifted. There is your Brucie Bonus! We record live with guide vocal. With some vocal overdubs. Its in the bag. quick, raw easy. Indulgence in lots of instruments is kept for the home studio and solo work. That solo work births songs and ideas. Watch this very space.
From live recordings
To home studio
Go with your flow… be free, in order to do that. Relax and open yourself. Channel the vibes. Like meditation set your intent.  Pressure and writer’s block are a curse of the creative. Be inspired by the good and the bad, be inspired by boredom, politics, the news.  Pick a chord, hum a melody write a thought, a poem, improvise begin the begin. Make something beautiful for you. Record your favourite song, turn yourself on. Intro-verse-chorus-verse-chorus-solo-chorus-chorus-end. Go crazy change the time signature and key half way through. I found sitting on the toilet scribbling lyrics on bog roll useful. Nowadays the advancement in technology means I can type it or dictate to my phone.
I’m a big improviser. I really do just go with the flow. I experiment with looping a rhythm, playing my acoustic until I like a chord structure. Vocals. I’ve been free flow lyric writing lately. (Writing as a go to listening the track) Whereas years ago I used to mainly write the lyrics first. Write stories, be the protagonist, write the things you can’t speak. Everyone has heard 1000 songs about love lost. Add a twist. Give it a serial killer, write about your crazy surreal dreams. Write about the bitter snooker hall bulldog chewing a wasp, who has caused parking inconvenience. Let the ghost in the machine take hold of your soul and spout out words that pop into your head and come from your hands. Even if they are not in the dictionary! Read stuff, get inspired. Learn a few words. Use the rhyming dictionary.

I scribble A-Z and rhyme to each letter. Even if it makes me dribble. Let it out. Do you think I know what this is about?  and I wrote it….;-0

Nephilim in darkness
Corroded movers
They shake new world orders
Roll it under, Make it thunder
Break the man in two

In a Band? Just jam ideas, work on them. Play nicely, communicate, compromise. From a seed spawns a song. Dictatorships make for unhappy puppies. If your dictator is a genius? make your choice: Stick with, earn big then have an almighty fall out and make a solo record. Or leave on principle, struggle but be creatively happy. Or just look for the right people. That may mean lots of fails and a few winners. Fate deals its hand too incase you didn’t mind.
~ Claudine