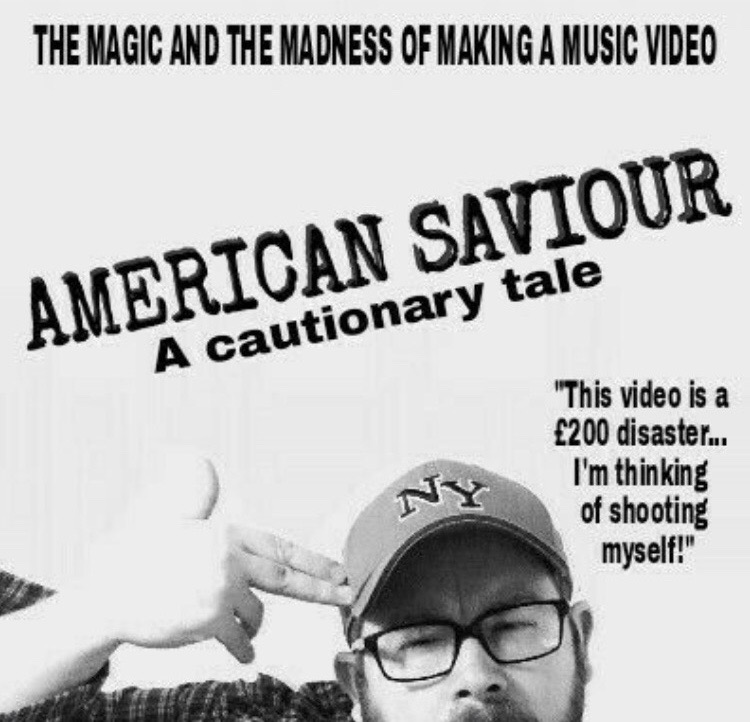 “If you never try, you’ll never know what you are capable of.”  John Barrow

Stranger things have happened. things nearly didn’t happen… but…I’m an improv inspired kind of bird. Go with the flow. This ideal is not shared by all. Which is why…..

12th Feb 2017 was the day Strange Currencies shot a the music video for ‘American Saviour.’  Paralleled with a pseudo documentary of ‘the making of’ to rival others .. should be released in the summer. With a story line and undertones of Cuprinol. This dip into politics may cause ripples with nipples. A few conti pad giggles.

With a self financed tiny budget, (500 x 50p and a mars bar mini) the kindness of The Acacia Centre  volunteers fancy dressed to impress, sausage and chip cobs(naps, buns, rolls to non locals), orange face paint, raspberry sauce and more wigs that Donald’s closet. Began a day of filming. After ditching his initial script in comparison to The Cure For Insomnia running length of 87– 10 mins in ‘cat years’ ;-0. A barrage of hissy fits ensued the day before. (A lesson about better communication, planning, prepping and making sure minutes are written in future with things!)  PP Johnson (band vocalist) overcame what can only be described as…. a fucking flid and directed. #evidence below.  Yet again I’ll quote this sunshine… “If you never try, you’ll never know what you are capable of.” John Barrow 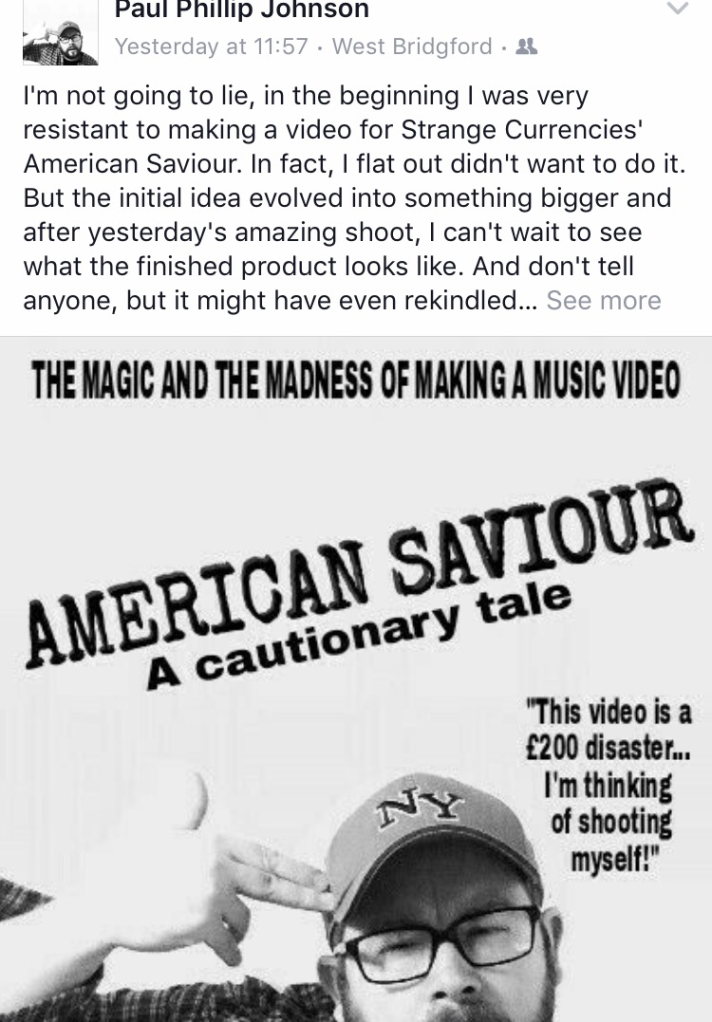 A word from Director PP Johnson:

“I feel at this stage that I might have to go into more of an explanation as to why I didn’t want to make this video initially. In light of a pretty damning blog, it’s now become important to me that people understand my side of this particular issue. I guess I’d have to say that I was the architect of my own downfall on this one. Basically, I pitched the idea for the video a couple of months back and we all agreed that we should do it. We’d been looking for a concept to hang a music video on for a while and so this seemed as good an idea as any. So we greenlit the project and everyone was happy. Fast forward a few weeks and new jobs for both myself and the band manager plus an album recording that was well under way meant that I started doubting our ability to produce a quality piece of work in such a short space of time. So… I went to my bandmate and the manager with my concerns and suggested that we either postpone the project or shelve it altogether. This suggestion was met with a fair amount of resistance and I was told that we were definitely going ahead and “I shouldn’t pitch projects if I had no intention of going ahead with them”. Suddenly one person was less happy.

😉 Anyway, life and work began to take priority, as they tend to do. Production meetings didn’t happen and communication on all sides became almost non-existent (due to individuals not replying to messages and various important sporting events). During that time a script was written and some pre production work had been carried out (admittedly not as much as I’d had liked but that’s on me). Come the eve of the shoot and I was a very frustrated bunny indeed. We were on a ship which seemed rudderless and heading for stormy waters, and I seemed to be the only one that saw it. After numerous tense phonecalls and a (now very public) meltdown from your’s truly, it was decided that we would change the project in order to try and turn the project’s weaknesses into a strength. Ultimately a new concept was born and the shoot went ahead. Upon reflection, I still feel that I was right to feel the way I did but I am grateful that we were able to turn potential tragedy into (fingers crossed) triumph. My actions in the build up to the shoot were those of a man who was being forced to do something against his will and it garnered the appropriate response. So there it is, the story from my side. Hopefully to be concluded in the summer with the release of American Saviour: A Cautionary Tale.”

So….after a winter of ‘Toblerones’ and turkey. With pre menstrual bloat, some virus illness shite that the flu jab possibly caused. You can imagine my surprise and horror at being directed with speaking parts! Bear in mind.. an E in ‘A Level’ Drama happened for a reason with me! I mumble and can’t remember lines or prompts, or act.I can barely function as a non musician at times. So genuine uncomfortable madness.. Fanks!

With the sort of pre match bitch diva fits that potentially split bands up and ruin friendships and prompt the band manager to consider leading a meditation with monks tour with backing band ‘Satans Minions.’  By the power of Greyskull.. no one died. A punch up did occur. Filming completed.

What won this Shoot was :  Wait for it…Team work, yes where no ‘i’ belongs.  Resilience, imagination, ripping off others ideas and persevering seeking the bigger picture. What one watches in hindsight though the looking glass in years to come. Becoming a coffin dodger is a daily Pac man challenge.
Big thanks for last minute leads, Angela Barker, who is also the manager who fortunately for some only used the boxing gloves ‘acting.’ Stepping in to the Trumpalumpa ‘Ronald Gump’ character. Notts Drag Queen, Madam Tesstickles (Steven Newbury) for the ‘Vanessa Theresamay’ hilarity. Talented true divas and excellent hilarious performances. The DJ’s, friends and families at Acacia Radio for giving us their time, featuring and letting us use their building and props. Kendal Louise Turley, who I first met in 2009 while recording an Idolins album at Confetti Studios, Nottingham. Joe our cameraman. Both very cool and talented folks.

Watch behind the scenes footage

Trump May punch up! 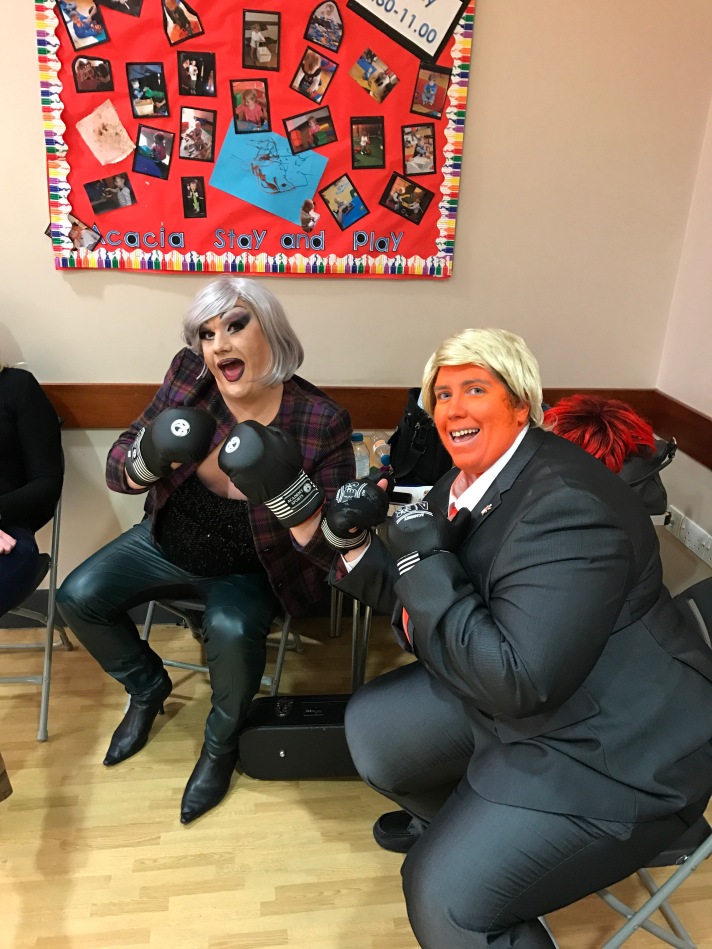 Here are some pics. To follow…. hopefully a music video and making of documentary 😉

I became rather fixated Baywatch wise too….. 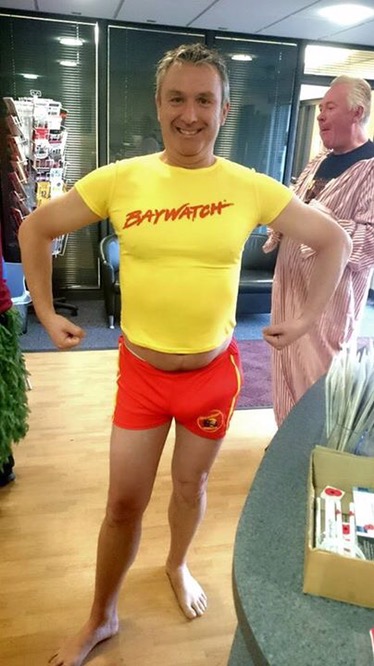 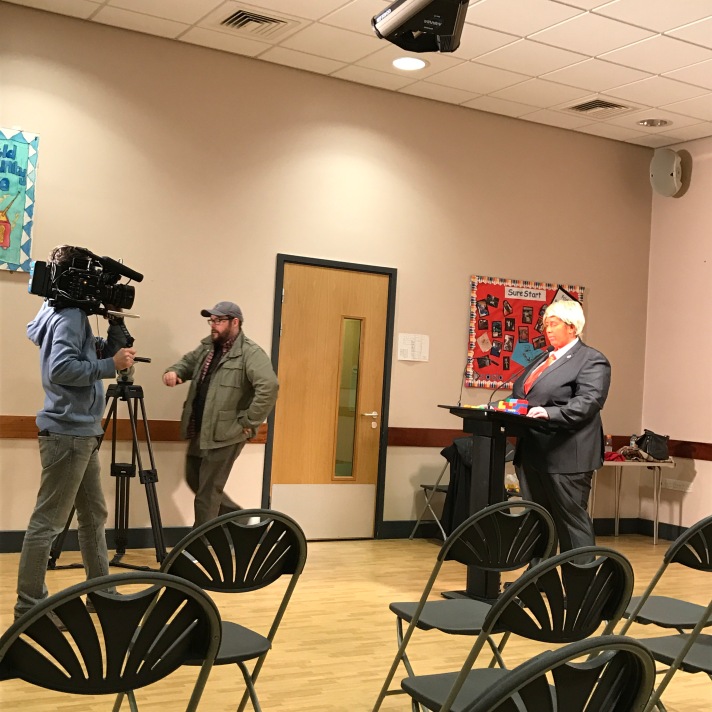 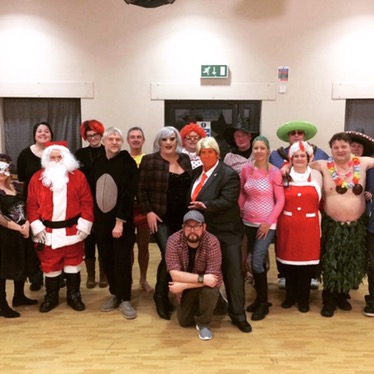 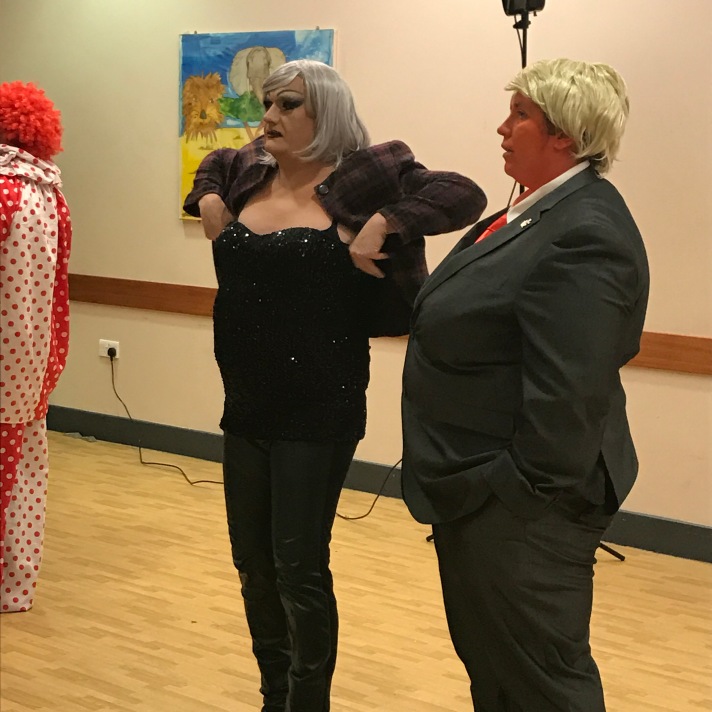 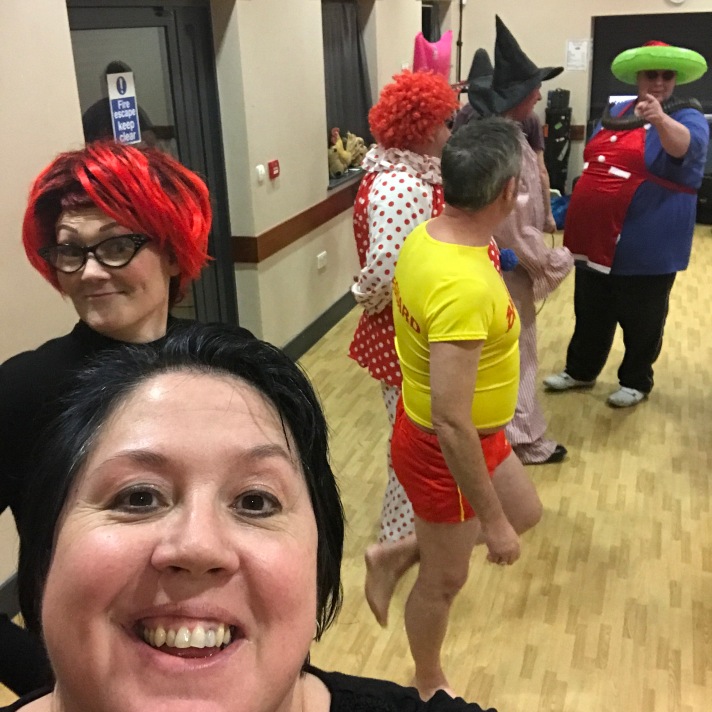 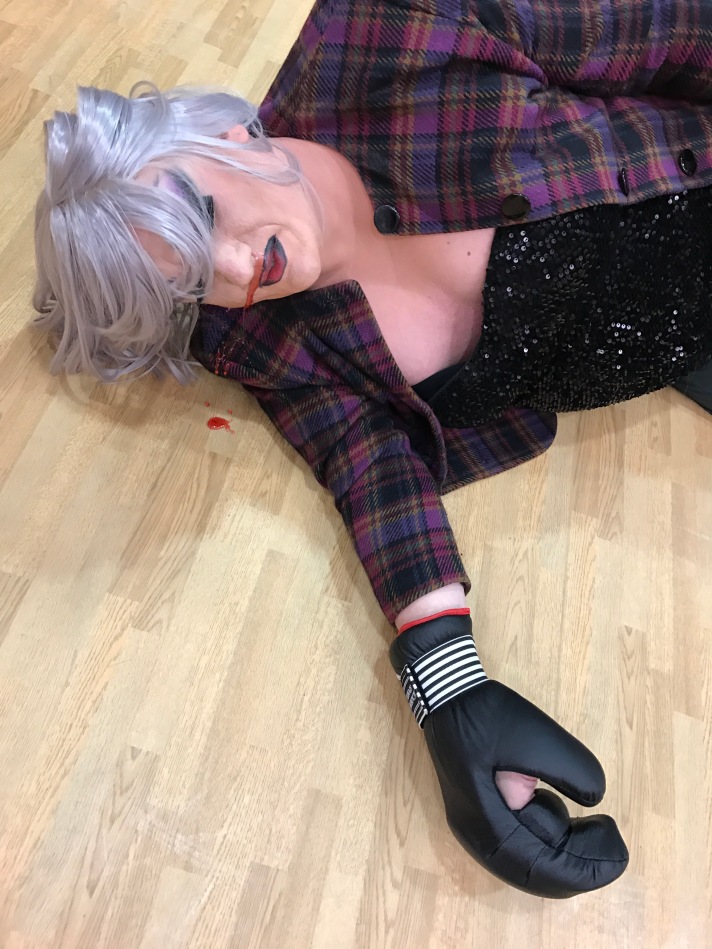 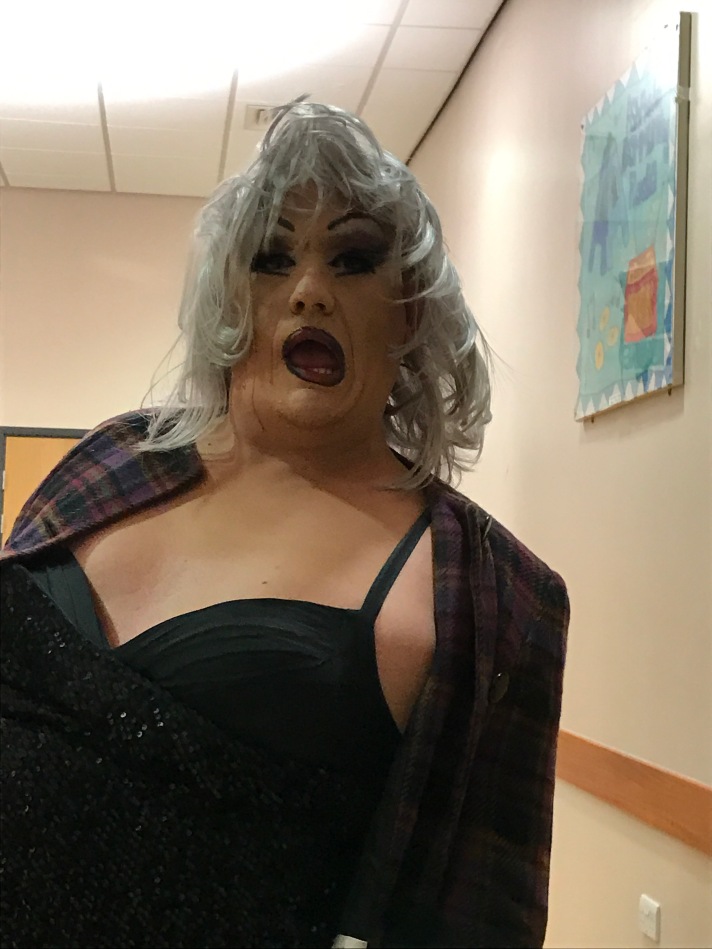 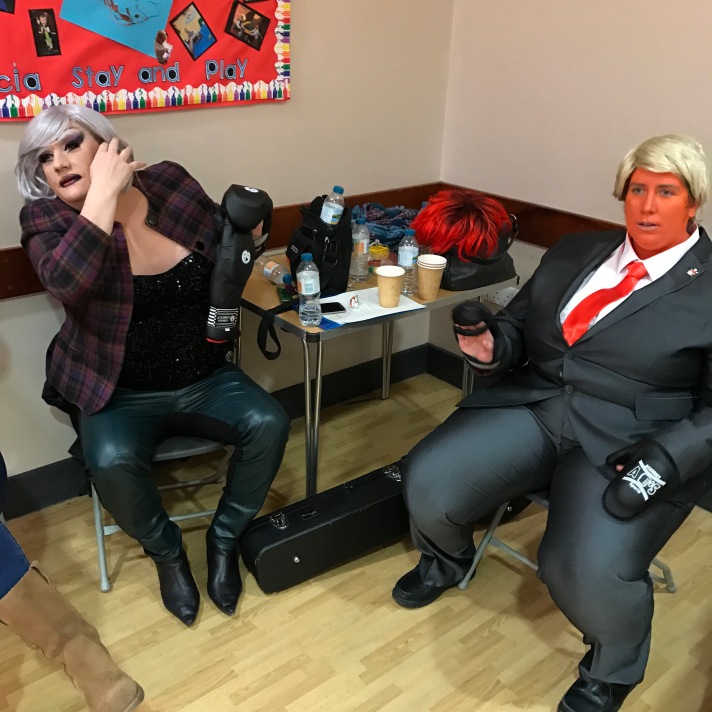 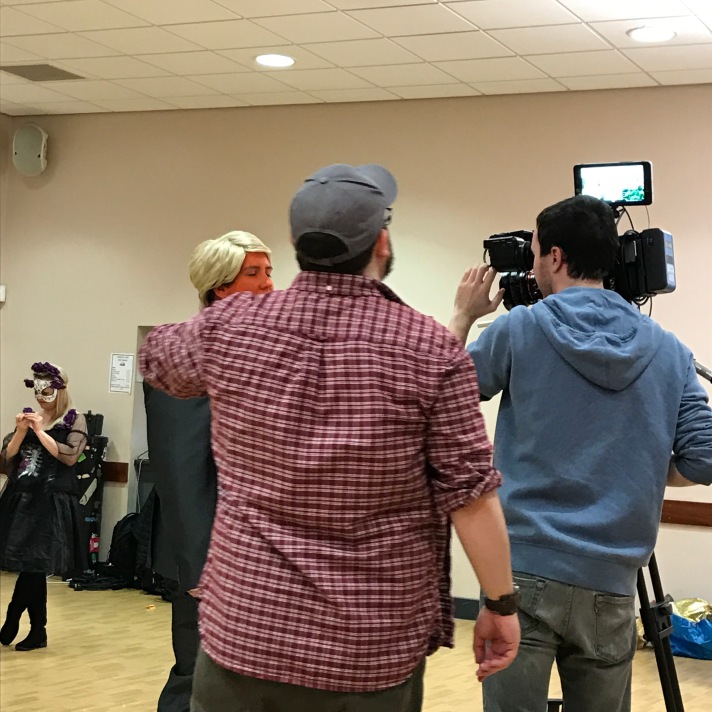 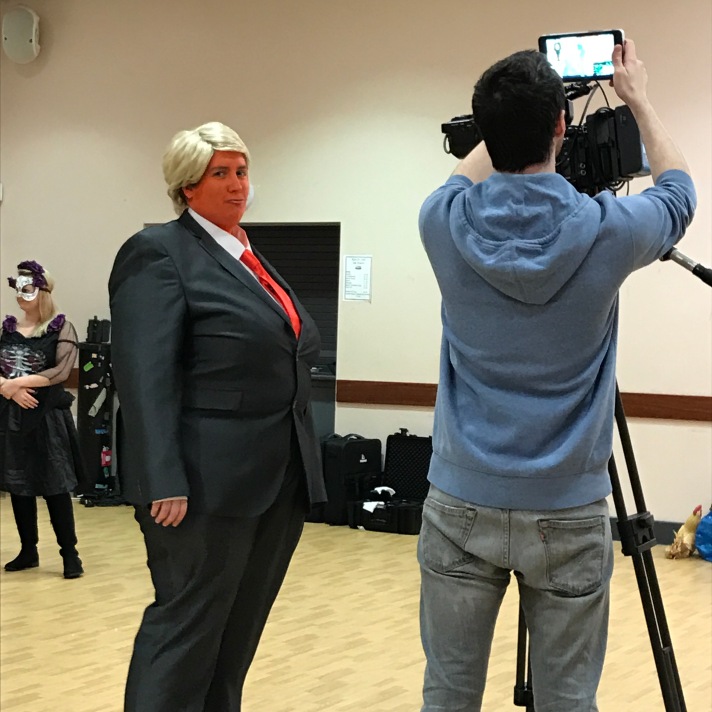 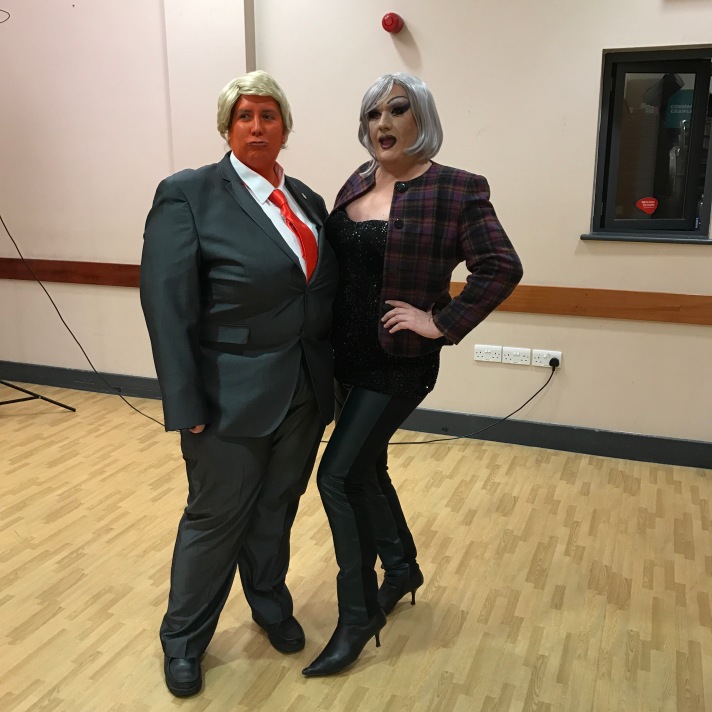 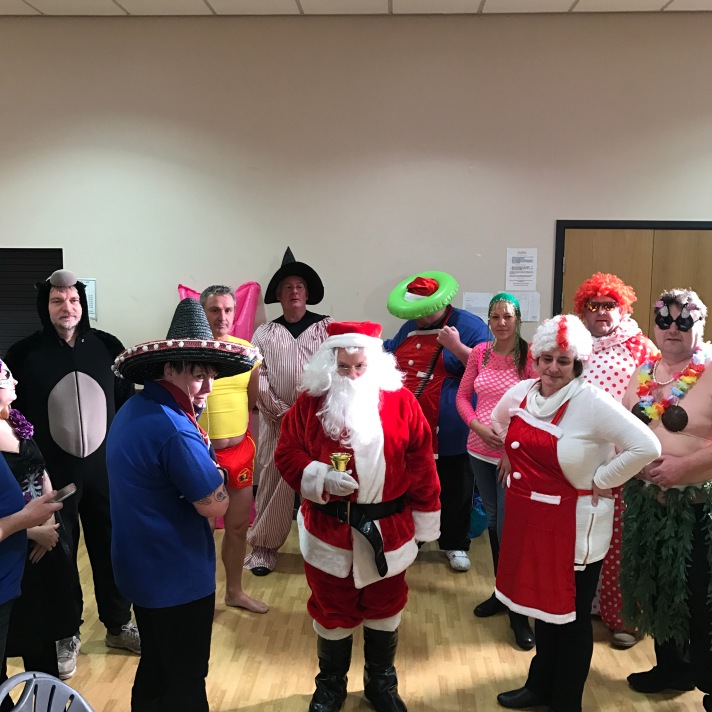 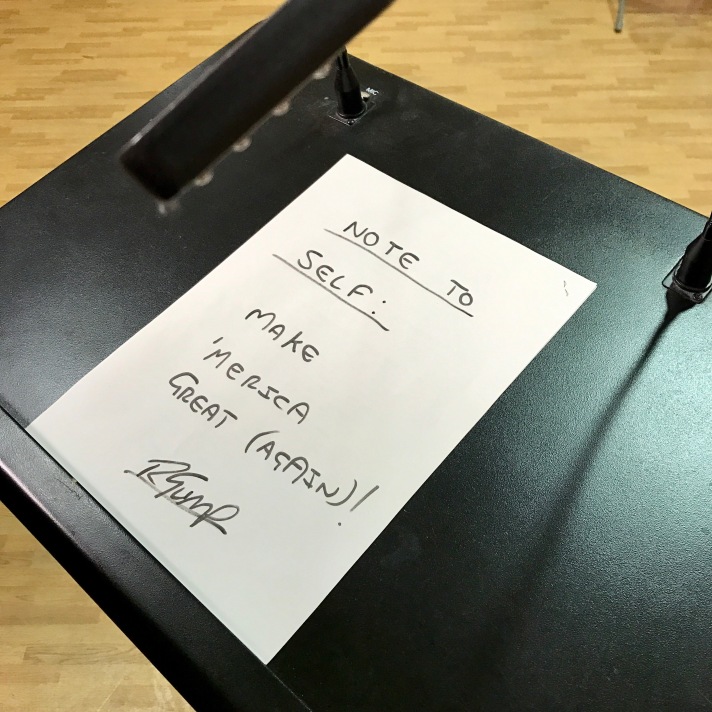 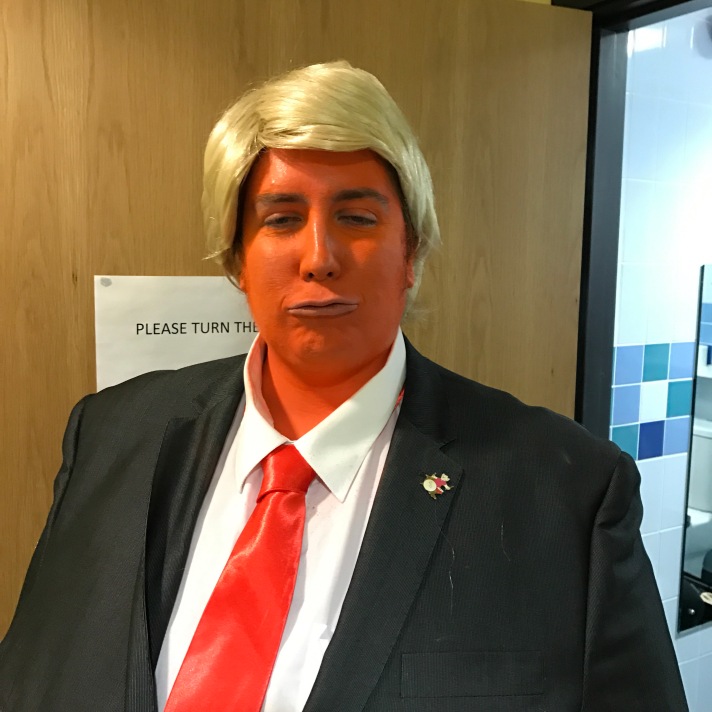 One thought on “Stranger Things…”